If you consider yourself a modern woman, chances are that the last time you wore your birthstone was back in the third grade.

You’re not alone: in fact, more than 25% of Americans don’t know their own birthstone. This quarter of the population is really missing out – because when it comes to celebrating your creativity, individuality and uniqueness, a gorgeous piece of jewelry featuring your glittering birthstone is the perfect way to do it!

So what are birthstones, exactly? Birthstones are gemstones that coincide with a specific month of birth. For centuries, these gemstones were believed to have special powers – and this is why certain stones have been attributed to various signs of the Zodiac. However, you don’t have to be an earthy Virgo or a creative Pisces to buy into the mystique that surrounds birthstones…

…Because your own birthstone can be the new standout piece in your jewelry collection as an engagement ring, anniversary ring, wedding band, pendant, or a fashion ring! 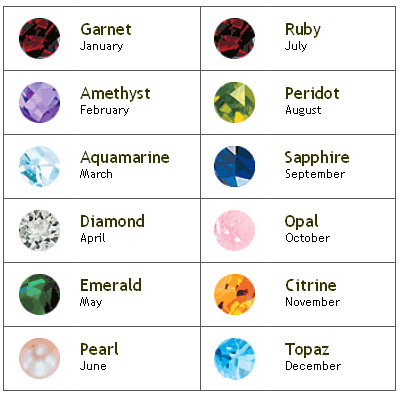 January Birthstone: Garnet.
These fiery gemstones have long been associated with blood due to its typical deep-red color; however, garnet comes in a range of shades and colors that will please even the most discerning of tastes. Garnet is believed to protect the wearer from nightmares and things that go bump in the night.

February Birthstone: Amethyst.
Typically displaying varying shades of purple, this gemstone was believed to induce feelings of tranquility, peace and sobriety within the wearer.

March Birthstone: Aquamarine.
Due to the sea-green color of this precious gemstone, aquamarine was believed to provide protection for those at sea. Aquamarine has also been attributed with varying powers, including making new friends and inspiring affection.

April Birthstone: Diamond.
It’s no wonder the diamond is a staple of engagement and wedding jewelry: this incredibly popular and desirable precious stone is associated with love, strength and eternity.

May Birthstone: Emerald.
The deep-green color of this gemstone is synonymous with healing; however, some cultures believe that one can see into the future while gazing into an emerald.

June Birthstone: Pearl.
Pearls have also been associated with chastity, modesty and pureness, which is why pearls remain such a popular choice for bridal jewelry and Sweet 16 birthdays. These iridescent birthstones look perfect as necklaces, stud earrings and bracelets.

July Birthstone: Ruby.
This deep-red gemstone is believed to provide its wearer with protection and harmony, and has been one of the most in-demand stones since ancient times.

August Birthstone: Peridot.
Because this gemstone is a by-product of volcanic eruptions, many cultures believe that peridot is an energetic stone possessed with many healing powers. Additionally, some cultures attribute peridot as a useful remedy against nightmares.

September Birthstone: Sapphire.
The deep blue of the sapphire is a highly desirable color, which is why this precious stone is in such high demand. Traditionally associated with faith and purity, its thought that a sapphire’s level of sparkle matches the wearer’s constancy and faithfulness.

October Birthstone: Opal.
This enigmatic stone (which is formed over thousands of years) has long been a staple of folklore; in fact, many cultures once believed that opals could be used as healing stones. Opals have also been linked to friendship and strong emotion.

November Birthstone: Citrine .
The name citrine comes from the French word for lemon, “citron,” which describes this stone’s yellow hue. In ancient times, citrine was revered as a gift of the sun and believed to be a powerful antidote to a viper’s venom.

December Birthstone: Topaz.
The ancient Greeks believed that topaz was a source of strength, which is why this precious stone is linked to vitality, life and mental clarity. Topaz comes in an extremely wide range of colors, including golden, pink and pale green.

As you can see, any woman can incorporate her gorgeous birthstone with a few modern twists!

2 thoughts on “Birthstones for the Modern Girl”