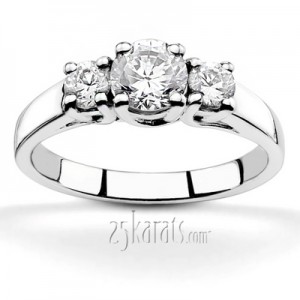 When it comes to getting engaged, we know precisely what should happen. The groom-to-be shops for the perfect diamond engagement ring. He picks a romantic moment to propose to his sweetheart. She says yes – and the rest is happily ever after.

Although the tradition has changed somewhat over the generations (for example, more women are proposing to men now), the tradition of the diamond engagement ring has remained consistent throughout time. But have you ever stopped to think about the history of the engagement ring – and why it plays such a pivotal role in getting married?

Prepare yourself for a fun lesson as we dive straight into the history of the diamond engagement ring!

Cavemen Started It – Sort Of

Turns out our prehistoric ancestors had a bit of a soft spot. Archeologists believe that the first “engagement ring” was actually braided cords, which were placed around the woman’s wrists, feet, and waist. They believe that this ceremonial act brought her spirit under the man’s control. Fortunately, this tradition ended when the ancient Egyptians began incorporating rings into the marriage ceremonies.

It’s believed that the first true example of the wedding band (or engagement ring) started in Egypt circa 2800 BC. Archeologists found several mummies from the era, which were buried with silver and gold rings on the ring fingers of their left hands. As ancient Egyptians believed that this finger was inextricably connected to the heart, they’re often credited with starting the ring placement tradition we ascribe to today.

The first recorded use of a diamond engagement ring arose in 1477, when Archduke Maximilian of Austria proposed to his sweetheart. This ring featured several flattened pieces of diamond that spelled out the letter “M”, for Mary of Burgundy.

The tradition of giving rings didn’t truly take off until the 1700s, when “posey rings” became all the rage in Europe. These bands were inscribed with love poetry and given to sweethearts as a token of their love. Across the pond, Puritans gave their brides thimbles instead of rings, as they believed the latter to be too frivolous.