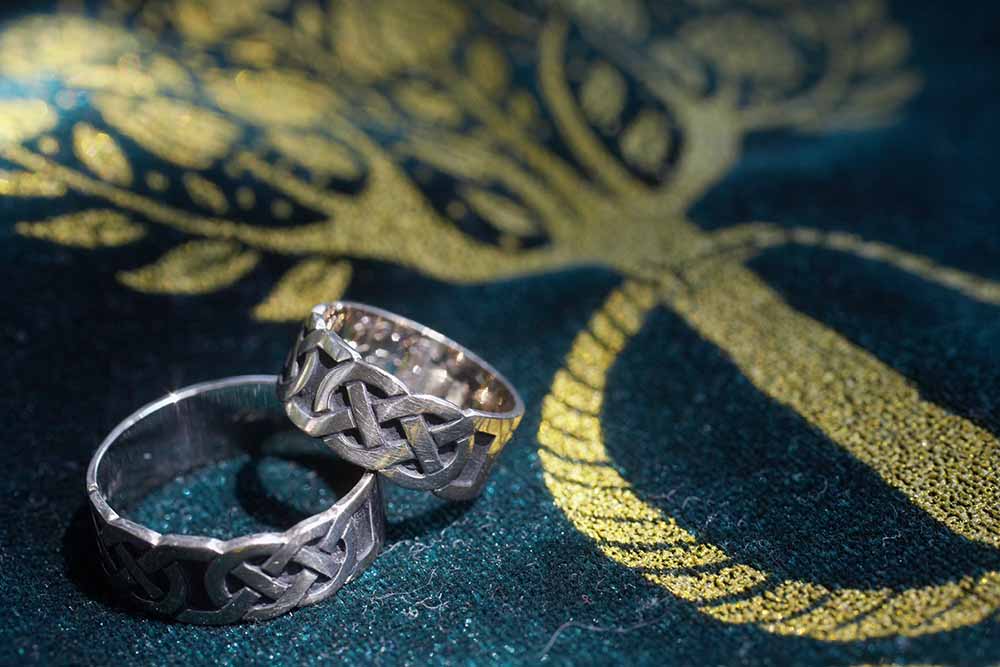 What are Celtic Wedding Bands?

Approximately 2,000 years ago the Celts were a unique group of people in Europe with their own art, mythology, and language. They were spiritual and viewed their natural surroundings as being holy. They used various symbols in their art and jewellery designs to show the connection between all living things. There was much depth in every chosen symbol in their creations and it was believed that they infused the wearer of such jewellery with a greater connection to the spiritual world.

Nowadays, this focus on spirituality and connection is emerging in wedding jewellery. If you or your partner have Celtic heritage because your family originates from a Celtic region, then Celtic wedding bands can be a wonderful idea to celebrate that. However, even if you don’t have links to Celtic heritage, the designs are so beautiful that they can easily add greater meaning and personality to your wedding jewellery.
It’s not just your engagement and wedding rings that can be invigorated with Celtic symbols and patterns, though. A Celtic anniversary ring for her is a great way to mark the years you’ve been married in a special way. By choosing a design that symbolizes your love, such as with intricate hearts or other Celtic motifs, you can add an individualized piece to your bride’s wedding jewellery set that she’ll adore forever.

Before you choose a Celtic design for your wedding band or anniversary ring for her, consider these common Celtic designs and their meanings.

The Celtic knot features a roped design on the outer part of the ring. It is also known as the ‘Irish Lover’s Knot’ because its interwoven knots represent eternity. There are many varieties to the Celtic knot. The Trinity Knot is one of the variations and it’s also known as the Triquetra. It basically looks like small triangles. The Triquetra represents eternal life, spiritual growth, and everlasting love. But the Triquetra is also said to be about unity of mind, soul and heart, as well as the connection between the physical, mental, and spiritual. The Celts viewed a knot that is unbroken and continuous as a symbol of eternity, so it’s a powerful one to have in your wedding jewellery. 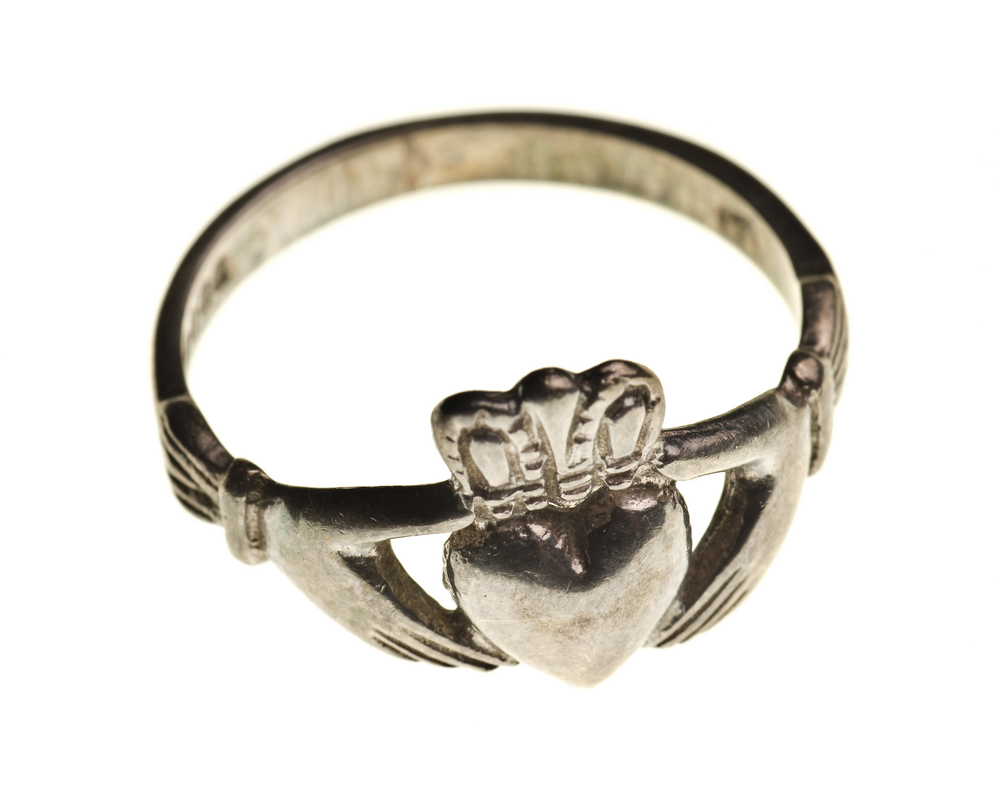 Another type of Celtic design is the Claddagh Wedding Band. This ring contains a heart with a crown on it that is being held by two hands. Every part of the design has meaning. The hands represent friendship, the crown represents loyalty, and the heart is a symbol for love.

The pattern of waves on wedding bands symbolize a flow of energy, balance, and water that connects to the moon (which was very important to the Celts), the dream world, and creativity. Sometimes these shapes can also look a bit like snakes. Serpents were considered to be connected to sacred water by the Celts, as well as being the source of reviving powers.

Spirals are a common Celtic symbol and represent different things depending on how they look. The singular spiral shape is radiation of ethereal energy, with interpretations including awareness, balance, direction, and progress. Double spirals signify opposing cycles, such as birth and death, and creation and destruction. Finally, triple spirals are known as spirals of life, in other words all the processes and journeys that occur between one’s birth and death. However, it has also been said that three spirals can symbolize land, sea, and sky. If we take the three spirals and the triquetra into consideration, we can see that the Celts paid attention to things being completed in threes.

Although hearts are commonly used as symbols of love and romance, the Celtic hearts in jewellery design are portrayed in a different and creative way, making them wonderful patterns for both an anniversary ring for her as well as your wedding day jewellery. The Celtic heart is often portrayed in a continuous line design. In other words, it looks like hearts connected on a neverending line. This is a symbol of the eternal union of two people, as well as faith and love continuing to be present through life’s tribulations. 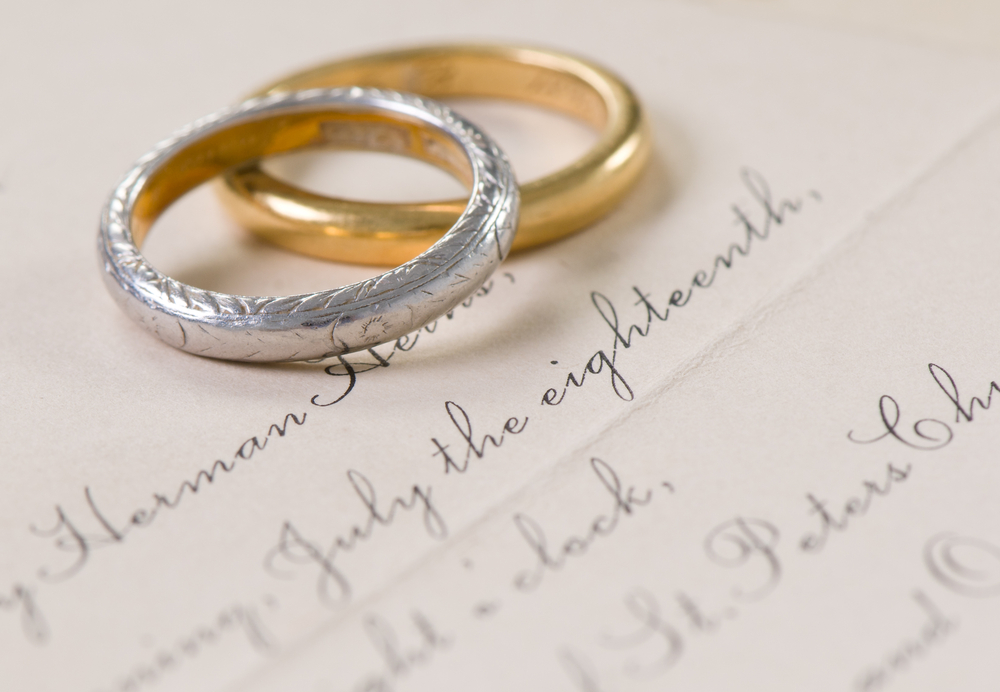 When choosing a Celtic wedding band, the type of metal you decide on is also important. Silver and gold are both special and meaningful in Celtic tradition. Silver is seen as the symbol of the moon. It carries feminine energy and was seen by the Celts as being spiritual. Gold, on the other hand, was viewed as a symbol of the sun and male energy. Consider this when choosing Celtic wedding bands to complete the symbolism you are hoping to achieve.

Celtic wedding bands offer traditional and individualized ideas for your wedding jewellery choices. Choose from a variety of symbols, patterns and their beliefs, to honour your marriage in a creative way that will stand the test of time.