Wedding bands are symbols that are almost as old as the institution of marriage itself. Over time, wedding bands have been used to symbolize love and commitment and in ancient times, they symbolized arrangements between families. The circular shape of the wedding ring is a symbol for eternity, as circles have no starting point nor ending point.  The symbolism of a wedding band is important, and most couples choose designs that mean something significant to add another layer of symbolism to their rings.

Celtic wedding bands are some of the most popular designs in the market. Couples with Irish heritage are often drawn to the unique patterns of Celtic rings, while non-Irish couples also find a great deal of beauty in the meaning of those patterns. 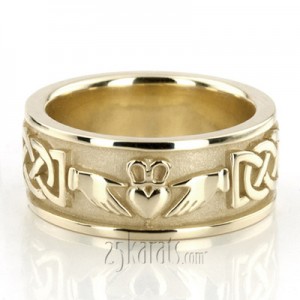 The most instantly recognizable of all Celtic wedding rings are Claddagh rings, sometimes called a Hands and Heart ring or a Clasped Hand ring. They have a long and storied history, dating back over 300 years. The rings originated in the fishing village Claddagh, a term that means a flat, stony shore. They depict two hands presenting a heart, with a crown positioned over the heart and an Irish phrase meaning, “Let love and friendship reign” is often engraved into the band of the ring.  The hands are a symbol of friendship, the heart symbolizes love, and the crown symbolizes loyalty.

Early Claddagh rings were made out of gold, but modern Claddagh rings are made from a variety of materials, and many incorporate gemstones into the design.  Many modern rings also depict two hearts rather than one.

How to Wear Claddagh Rings

Celtic rings are all about symbolism, and the way in which the rings are worn help tell the story. Claddagh rings were originally given as symbols of engagement. The wearer would place the ring on the left hand, with the crown pointed away from the heart. If, however, the ring is given for a reason other than a wedding, it is traditionally worn on the right hand, with the crown pointing towards the heart to symbolize an openness to love.

Claddagh rings are most heavily associated with marriage, however they are also popular Mother’s Day gifts, birthday gifts and graduation tokens. Many people present the rings with the wearer’s birthstone in the center. Celtic rings symbolize both friendship and love, which makes them versatile symbols of love and admiration. 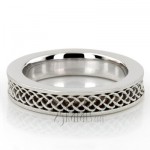 The Symbolism of Knot Patterns in Celtic Wedding Bands

There are an almost unlimited number of Celtic knot patterns found in wedding bands, and all have a unique history and symbolism. Some of the most popular patterns include:

Symbolizing the notion of the union of Trinity, the Aria Knot is formed from the intersection of three arcs that connect at a point. Each line is separate, yet equally important in the pattern. The pattern is about balance, and has been used to symbolize everything from the Holy Trinity to Celtic goddess lore to the importance of mind, body and spirit. 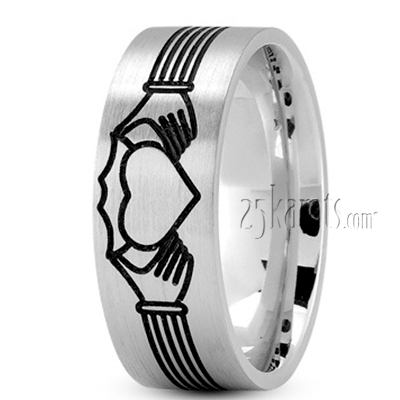 In rings, the Donegal pattern is created by using both gold and silver, with gold symbolizing the sun and silver symbolizing the moon. The strands overlap in a bold pattern that has been used to depict the weaving together of two paths.

This pattern depicts the ways in which different forces of energy work together, suggesting a flow and ease in partnership. 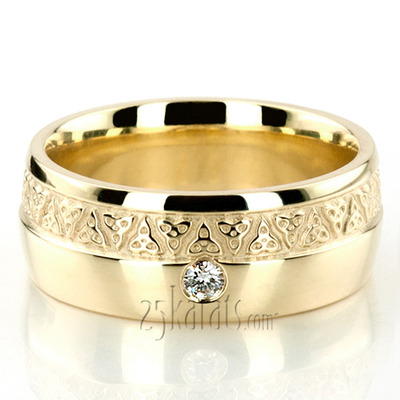 In Rope Pattern rings, two gold bands weave into each other, each the same size and pattern. They connect, creating a common circle, symbolizing the way in which two sources of energy work together to achieve a common purpose.

Celtic wedding bands can add even more meaning to the classic symbol of love and commitment. Couples looking for unique patterns that also carry significant symbolism should consider Celtic patterns, some of the most artistic patterns in history.